Hi,
We want to merge the quantity of two diff bins in CETEC.
The issue arises when we move the quantity from one bin(005-005-001) to another bin (005-005-002), the CETEC create a new bin with extension of same number of bin to which i move that quantity, like (005-005-001-1). We want to avoid this scenario and just want to merge the quantities under the same bin, without creating the new bin. If it is possible? then kindly provide us greater solution for this scenario.
Thanks

When you move the bins, as long as the bin number is typed exactly the same as the existing bin, then it should work as you’re describing.

You’ll see a pop-up window that asks if you want to merge bins (you’ll lose traceability on the inventory in the bin being moved from), Create a new bin with a new suffix, or chose a different bin.

If you’re not seeing that popup, or if you’re clicking merge but new bins are still being created, then let us know.

When you merge the bins I believe it will average the costs. For us, this has caused some issues with the GL so we do not merge bins and just utilize the suffix.

It is possible to merge bins without creating a new bin with the additional suffix.

Lets say below, we want to move the 15 parts from bin A-12-5-2 in to A-12-5. Note the starting total bin qty for our target bin. To start the process, click move next to the receipt for the bin containing the qty we want to move. 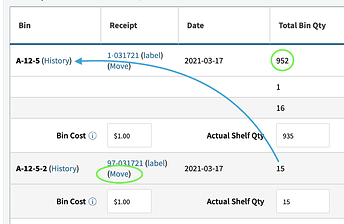 Now, on the receipt move screen, confirm the qty that’s being move from the originating bin, and tpye the bin number for the destination bin exactly as it appears in the existing bin column below.

When you click submit, you should get the following popup, and will click merge after reviewing the alert regarding traceability.

After clicking merge there’s a popup to show that the move was successful.

And back on the part record we can see the bin qty for the destination bin has been appropriately increased.

Let us know if that all makes sense, or if there is a problem preventing you from being able to merge bins in this way.