Does anyone have any ideas or workflows for reworking stocked inventory? We are in a situation where we want to modify existing inventory and would like to maintain part traceability with the order.

is the main product/part serialized?
Are you performing modification operations?
or adding/subtracting/substituting components?

We create production build work orders for reworking/modifying assemblies. Update the rework Order’s BOM to include the part to be modified, along with any other parts required.

Create Labor Plans to define operations to be followed for rework.

is the main product/part serialized?

-yes, so we would just pick and re-assign same serial number

Are you performing modification operations?

-not so worried about operations part of this, we use seperate travelers and rework forms for builds

-adding components in this case and up-revisioning the assembly. I think this would have been easy if we could just make an order specific BoM and be able to add the part number of the assembly we are reworking. Currently Cetec does not allow child BoM component to be the same as parent BoM, which I totally understand the logic, but would help with this scenario.

We do have reworking stock assemblies in the pipeline for potential future development, but no specific plan or deadline for it at this point.

@regisphilbin’s recommendation could be workable here, as long as you’re not wanting to remove components from the assembly but just adding. Essentially you’re creating a new part/bom record for the reworked build, and using the original assembly as a component.

Thanks for the feedback! Looking forward to the additional rework feature whenever it becomes available.

Struggling with a similar issue here. I need to rework components from existing inventory into the next revision, which is interchangeable. I can’t add the component that I’m building as the BOM. I get an error presumably because I’m trying to add the item to itself as the BOM. Is there a way around this?

I think what might work here is using a rework order to make the changes to the assembly (similar to what you’d do is a customer was returning product to be fixed). Presumably, if the finished assembly is in stock, then there’s a build to stock order/invoice for the assembly. You could issue an RMA against that internal invoice, and then use the RMA to rework the assembly using the new components.

Thank you. In my case this was an individual component and not an assembly. I’m just sticking it back on a machine to modify the size of some features that we decided to change. Would the RMA process still work for this?

Was the component received as part of a build to stock order originally, or was it a purchased component that you’re modifying after the fact?

The component was received as part of a build to stock order originally. Reworks like this can happen as a result of change management processes that indicate that existing stock should be modified into the newer configuration, or it could result from and MRB dispositions requiring rework processes.

We handle modified items just like any other BOM where the purchased item effectively becomes raw material for the modified item.

Since it was received as part of a build to stock order, there should be a linked internal invoice. You can use that to create an RMA for the parts that require attention, and then from the RMA create the rework order.

OK. Thank you. I’ll give that a shot the next time I have that situation.

I don’t see an RMA option on the invoice. I am looking at Generate RMAs/Rework Order from an Invoice and it shows that the RMA link is at this location. It’s definitely not on my screen. 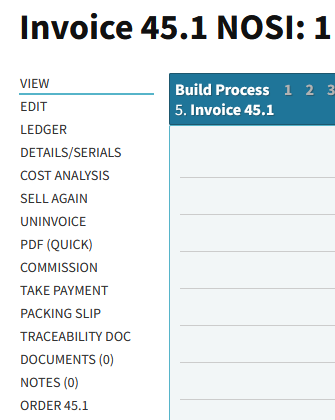 My mistake, I guess we don’t let you create RMAs from internal invoices. However, you can still navigate to the RMA list and manually create an RMA with the internal account as the customer. Then add the affected parts to the order, and proceed with processing the RMA.