I have a multi level BOM with Subassemblies and i’m having a hard time getting the top level assembly roll up costs (on this page: “…/part/11/component_list”) to be accurate. In some cases, certain parts in the indented BOM are not showing a price, just $0.0000 but inside the BOM, the accurate price exists…see image below. Both pages were simultaneously displayed in 2 browser instances… 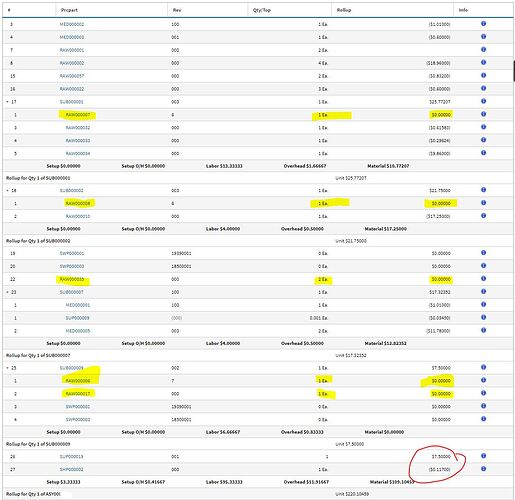 Also, why is the rollup value in parentheses? Some items on this page: “…/part/11/component_list” show up with parentheses and some do not…(see red highlight)

Fortunately there are some straightforward answers to your questions there!

Second, if you hover over the parenthesis you’ll see it reads: “Not a BOM, part Ext Cost used”. Rollup is only calculated for BOMs. So, instead of Rollup, if it’s not a BOM, it will use the “cost record” extended. The reason why you see some raw component items in the BOM overview that do not have the parenthesis is because those have BOM records with zero components inside of them (blank BOMs). If you removed those BOMs from their part record, you would see the parentheses.

Hope this helps! Thanks

IF not, how do i get the overall BOM cost of this assembly? because the current unit cost is incorrect… 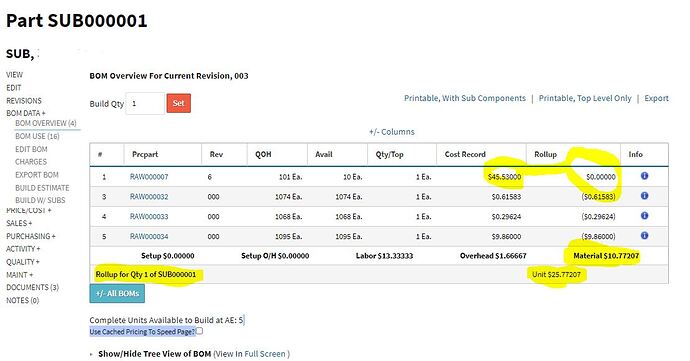 That RAW000007 part has a BOM record with zero components I believe. I think that’s the root problem.

I think if you remove the BOM record from that RAW000007 part record, it will register the cost record and the overall BOM cost will work.

Maybe give that a try and see if that helps?

I think if you remove the BOM record from that RAW000007 part record, it will register the cost record and the overall BOM cost will work.

Do you mean clicking on the “remove as BOM” button? if so, i’m not sure we can do this as this part has had many revisions and we document the “change” of these parts using the ECO process (which requires “parts” to be BOMS if you want to capture revision changes)

Well that is a bit of a pickle.

I think the best short term workaround would be to go ahead and click that Remove As BOM button, and keep it as a normal raw component by default. (After you remove as BOM, you may have to refresh the browser once or twice to see it propagate).

Then, in the future, if/when an ECO is needed for that particular component part record, you can add the BOM record back to it during the ECO process, then remove the BOM again when the ECO is concluded and the rev is updated.

I realize that’s a wonky workaround… longer term we could potentially look at getting to support ECO rev changes on raw components instead of requiring the BOM.

do you know if the roll-up cost calculation changed in your system recently? I seem to recall in that recent past
(6 mo?) that this roll-up cost would include the component cost, even when the BOM items might have had zero components…I could be mistaken though…